As many of my colleagues from Africa can attest, it often felt like a battle just to get to Mexico for the 2022 SVRI forum. During my 28-hour flight, and having never been to an SVRI Forum before, I found myself questioning whether the conference would be worth all the back pain. Yet, the closer I got to Cancun, the more my expectations started to rise.  At my layover in Frankfurt, connections were already being made. People were meeting one another, all from different countries, asking whether they were fellow delegates. I could feel the excitement in the air, the recognition in the eyes, the kindred manner of being that spoke of professionals working in this field, and the whisper of the words SVRI. I started to anticipate how large this conference would be, and how far the reach of the SVRI’s arm was.

But it was not until arriving to the humidity that I truly started to realise how large this Forum would be. There were colourful conference bags that helped us identify one another as Forum delegates. But with over 1,000 people registered, I soon realised that I didn’t need the conference bags to identify delegates as it was safer for me to assume that everyone I met was a delegate. I was surprised to find Hotel Paradisus an accommodating and lively place, filled to the brim, and somewhat overwhelming. I got lost so many times throughout my jetlag on that first night that I was afraid I would fall asleep in the hallway. 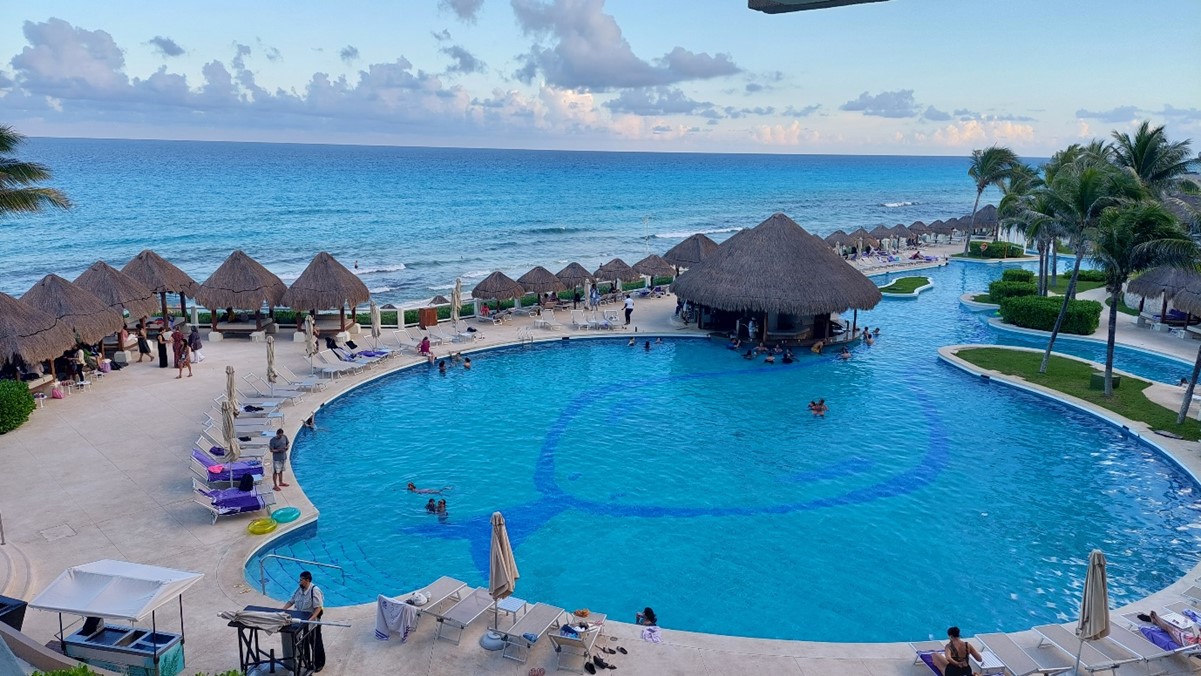 When calling my family and friends to brag about arriving in paradise they all questioned whether I was truly there on business! I found myself facing their disbelief when I informed them that I was just as excited for the content of the Forum as I was for the accommodation. The fact that the Forum broke out into a dance every time we gathered together further solidified the idea to my family that I was in Mexico for a giant party and could not possibly be there for work. However, every time we all gathered together, I found myself meeting so many people who spoke about their work with such passion that I found myself wishing I could attend every single session offered.

Even before the opening ceremony, my first event was the pre-conference workshop on preventing violence in and through schools, where I had my first experience in matching faces with the names I had only ever seen as authors on papers. I had been one of the authors on the large evidence review of violence prevention programmes in and through schools in the global south that was conducted by the Coalition for Good Schools. So many of the papers I reviewed were written by Karen de Vries from the London School of Hygiene and Tropical Medicine, that I was quite starstruck when I was given the opportunity to meet her in person. Not only that, but she knew my name and came up to me to introduce herself so humbly that I was forced to admit that she was a person and not a giant. 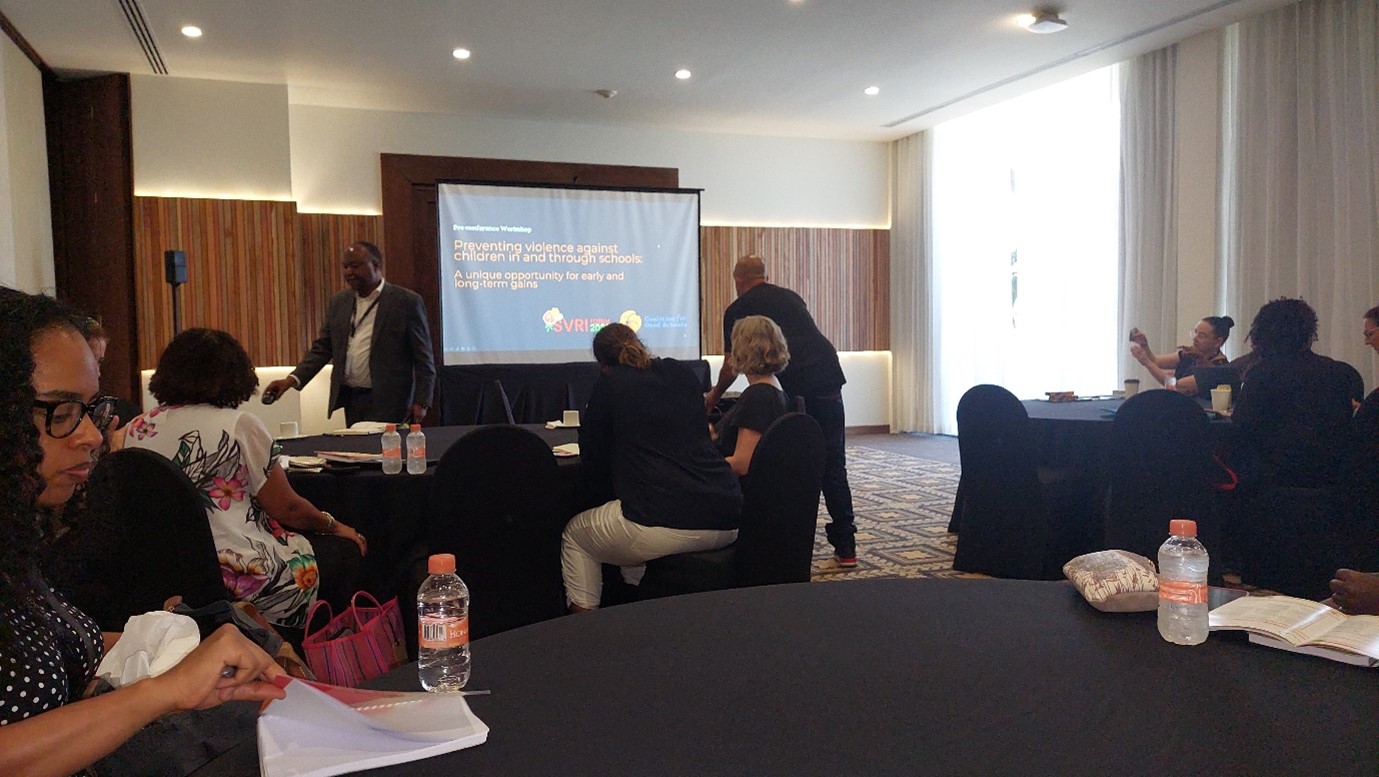 Being part of and listening to the discussions, I could not help getting excited about what was going to happen next in the field of school violence. I left feeling that, yes, schools definitely are an amazing vehicle to reach large amounts of young people for gender programming (amongst others), but that we need to be careful not to over-research schools and instead we should scale up programmes that are short, simple, practical and applicable. There is still not enough data on sexual violence and teacher violence in schools, around intersecting groups of children (such as migrant kids and LGBTQI+ kids), or around out-of-school children. We also still have far to go within the areas of youth participatory research methods, the political empowerment of children, adapting programmes for the local context, supporting teachers to ensure they have enough resources, and ensuring local buy-in during implementation.

However, I heard so many good stories from colleagues who managed to align their programmes within the national policy or within the educational curriculum. I felt excited knowing that many of the major thought leaders on school violence in the global south were in the same room and were all equally as invested and excited as I was. All this excitement and the conference had not even officially begun! I found my SVRI branded notebook already stuffed with ideas by the time I attended the opening ceremony and plenary. 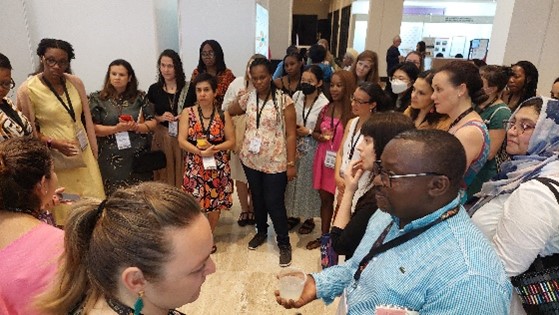 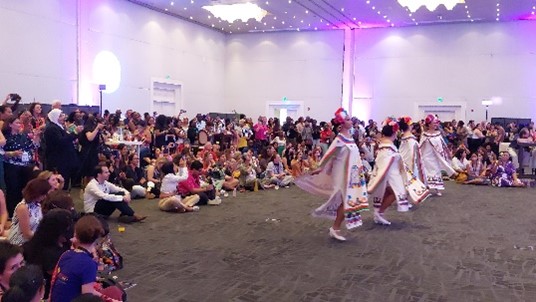 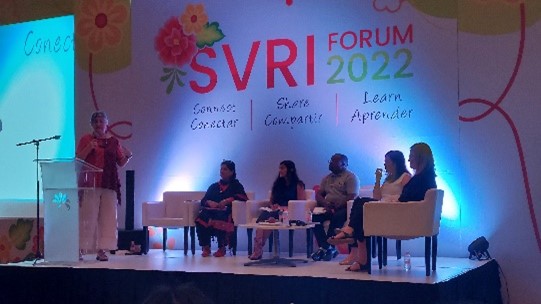 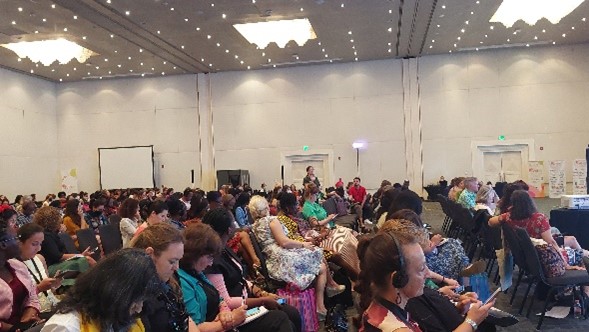 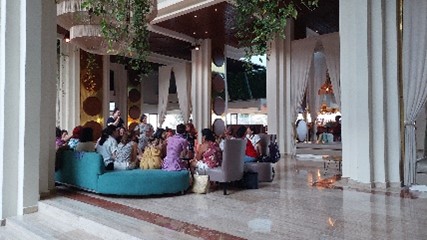 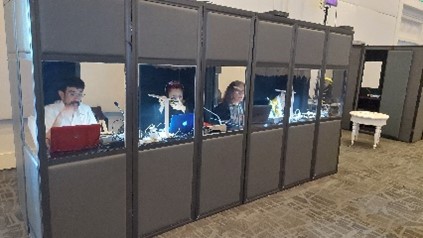 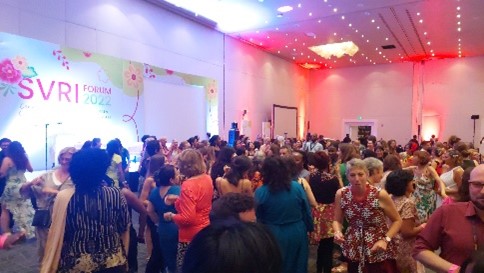 The rest of the Forum continued in this fashion. I met so many of the huge names in the field, met several young researchers like myself and became fascinated by their work, and was able to connect with others on a more informal level at networking events. I also enjoyed connecting with other members who received the SVRI bursary, and I feel I’ve made some good friendships that will last for many years. My LinkedIn account is now filled with many new connections. 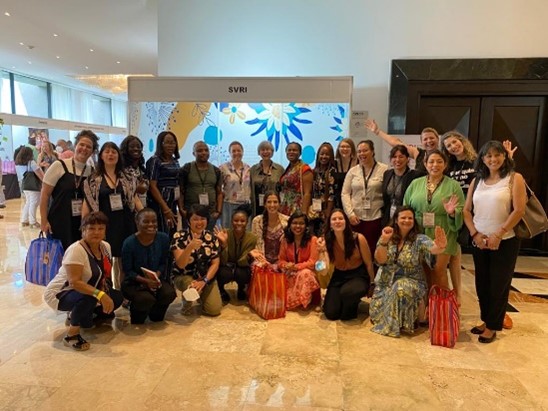 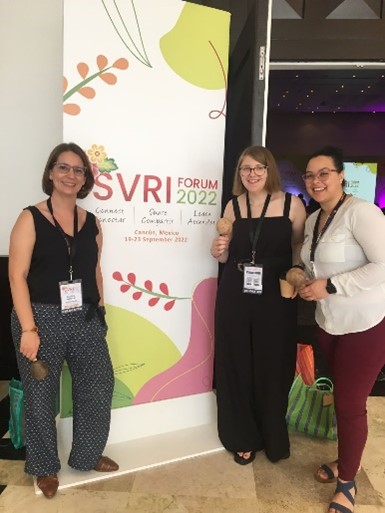 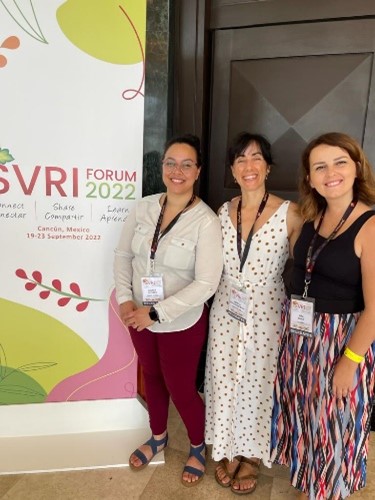 [Pictures in order: bursary group, me with Lauren Baerecke and Natalie Davidson, and me with Rebeca Revenga Bacedas and Nita Shala].

It was quite difficult to choose which sessions to attend and I often wished that I could be in three places at once. I ended up prioritising sessions on programme adaptation and parenting on the first day. In my session, I also met several other researchers working on the intersections of violence against women (VAW) and violence against children (VAC). I felt particularly honoured to be a part of this panel in the growing area focusing on the intersections and hearing of the common experiences across countries This session was chaired by Alessandra Guedes – another humble giant whose work was referenced by me and all my fellow panellists, and who left me feeling both starstruck and included. I will definitely be keeping an eye on the work that the others in my session are doing. After my session, I also had an interesting conversation about the child sexual abuse of boys and several other practitioners seemed to notice this gap and met up to discuss and share resources about the oft-hidden issue.

On the second day, I felt the plenary discussion on interventions helped set the scene for my entire day as I prioritised sessions on programme evaluations, using online apps for safety planning, and intervention development. This day also ended with the gala dinner, where I was amazed to be seated around the same table as many indigenous Mexican women, researchers from all around the globe, and where I was able to put some of my very basic French skills to use with other delegates. After this event-filled day I woke up at 3am, not from jetlag, but from excitement. I was suddenly inspired by what I had heard in the evaluation and development sessions that day and could not stop myself from filling my notebook up with ideas about how to increase the collaboration and engagement with our partner community-based NGO and facilitators, as well as how to improve the programme we are designing, and how best to co-create a theory of change, and design social messaging for community norms change. I could suddenly see the gaps in my own programming and was re-invigorated to align it with the evidence of what works.

I found the daily plenaries particularly interesting, especially the day three session, which was an emotionally uplifting plenary about the researchers on whose shoulders we stand. It was interesting not only to hear about the work these great women have done, but also their backgrounds and childhoods and what led them towards their research interests. I had always thought these huge names had started their professional careers knowing exactly what they wanted to do. But their stories were similar to what my Director, Professor Shanaaz Mathews of the Children’s Institute, always says: that she is an ‘accidental academic’. And so, I recognised much of myself in them – in that the more experience they gained the more they noticed the gaps and then they merely ended up following the flow of their curiosity. This inspired me to think that one day I might become one of those researchers that inspires the next generation. 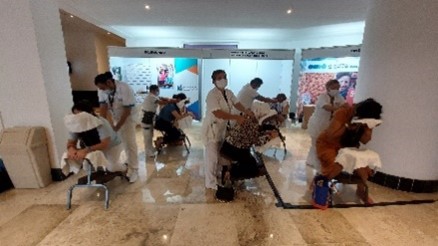 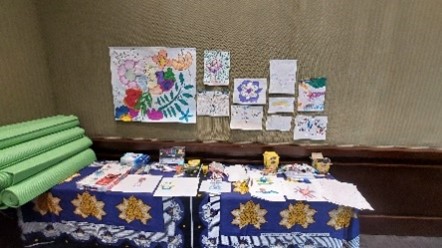 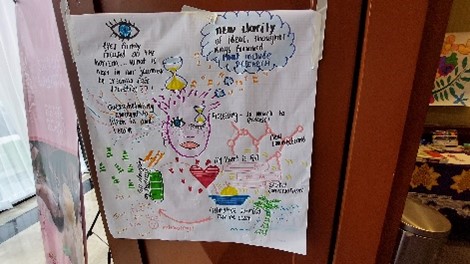 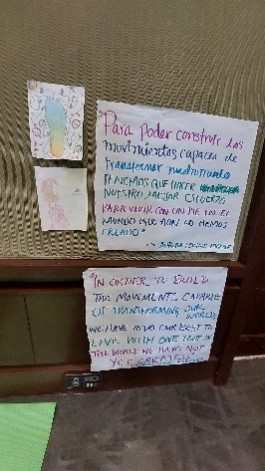 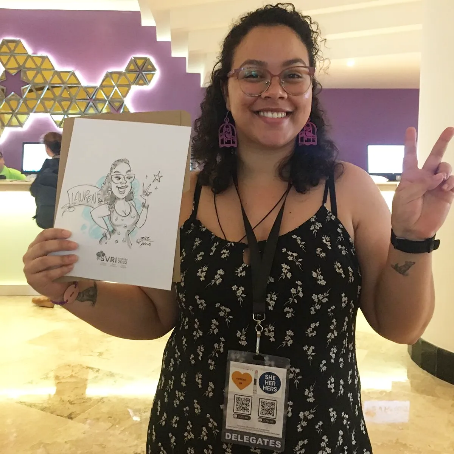 [Pictures in order are: chair massages, 3 photos from the facilitated arts experience, caricature drawn of me]

After this inspirational start to the day, I attended my absolute favourite session on violence against women prevention. This session helped me to clarify my own thoughts around shifting social norms, how to utilise technology for prevention (an increasing area of interest for me), and what to keep in mind when adapting and implementing a programme for a different context. I then got about ten minutes into the four-minute presentations on understanding violence against adolescents when I found myself overwhelmed and in need of emotional support, which was readily available thanks to the Care team. Their assistance was invaluable, and Katie even came up to me afterwards to make sure that I was okay. I participated in several wellness activities, where I particularly enjoyed the facilitated arts experiences, the chair massages, and the dancing resilience activities.  I was able to recover enough to go to the closing ceremony and attend the 10th anniversary celebration for the Global Women’s Institute, whose GenderPro programme I am currently enjoying so much. 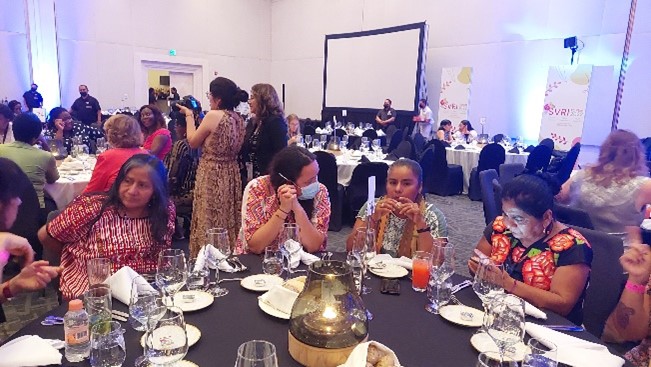 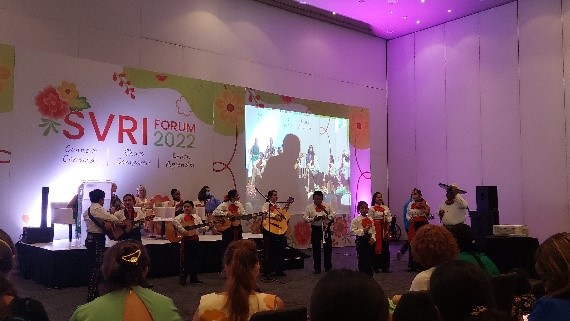 [Pictures in order: my table at the gala dinner, the closing ceremony]

On the last day of the Forum, I managed to find some time to explore the coral reef in a mini-submarine with a group of delegates as well. There, I met some colleagues from South Africa who were also enjoying the end of the Forum. It was ironic that a conference held in Mexico allowed me the opportunity to meet so many of my colleagues from South Africa, whom I had only ever seen on Zoom calls. 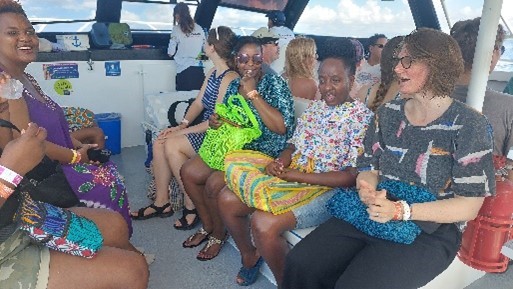 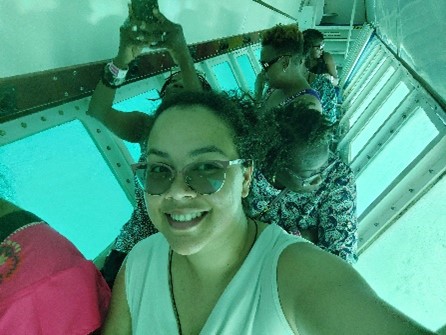 [Pictures in order: Delegates on a boat, me and other delegates on the subsea mini submarine]

I write this as I am waiting for my shuttle back to the airport in Cancun, and I find myself ready to leave. Although I have thoroughly enjoyed this experience, and although I am eternally grateful to the SVRI for providing me with the opportunity to attend, I find my petrol tank of passion filled to the brim and find myself so filled with ideas that I cannot wait to get back home to South Africa and find ways to incorporate everything I learned. But I am certain that I will keep in touch with everyone I met and continue to exchange experiences and ideas that will help the field grow.