This was first published by Alliance Magazine. Permission to publish on the SVRI Blog was given by the authors.

Over the years, most of us have been taught the ‘golden rule’: do to others what you want them to do to you. But this needs to be challenged. Last year, during an incredibly inspiring conversation as part of the Thousand Currents Academy, I heard something that stayed with me and has influenced us at The Womanity Foundation.

This is the ‘platinum rule’: do to others what they want to be done to them.

To be able to go deeper in this process, it’s important to reflect about the real motivations behind philanthropy and how we do it. We believe that sustained development and transformative change can only result from deep listening, unlearning, and by being aware of our own biases. By questioning ourselves constantly.

When we were invited to write this article, we started to reflect on our lived experiences coming from colonised countries: Laura from Brazil and Shivani from India. How had the past of our countries shaped who we are and how we see the world? While coming from a position of privilege when compared to many others, our backgrounds influence the way we work, the way we see philanthropy and the growing conversations about decolonising philanthropy.

I (Laura) moved from Brazil to the UK 17 years ago. Despite being a white cis-woman fluent in English, well-educated and with a successful career, I suffered micro-aggressions for being an immigrant and having an accent. I felt that many of my colleagues that came from colonising countries (both at academia and at work) had a lot of self-confidence – which sometimes overruled my self-confidence. And it took me years to understand that.

I (Shivani) hail from a typical Indian middle-class background. Good education, freedom of choices and a focus on career enable me to be where I am. However, society still prefers ‘fair skin’ and bows down to hierarchy, a strong leftover of the colonial past. My brown skin never really bothered me until I started travelling internationally for work, where very often brown skin belonged to ‘doers’, while the thinking and leadership roles were for the fairer skin.

Given the environments where we grew up, we often talk about what it means for us to be co-leading a Swiss foundation. How do we feel about being part of a foundation that supports organisations based primarily in colonised countries? And more importantly, how can we adapt our approach to address the baggage of colonisation, which is still rampant in grant-making practices?

We believe that when talking about decolonising philanthropy, we need to acknowledge a few underlying factors, such as…

In our journey to advance women’s rights, it’s important to remember we don’t need to empower women as if they didn’t have agency. We need to remove the barriers which inhibit them from fulfilling their potential. When talking about gender-based violence, we should be talking about survivors and not victims.

Recognising that the communities we serve have agency, knowledge and power to change is the first step towards creating a more equitable and just world. This is one of the main challenges for more traditional Global North led philanthropy.

To decolonise philanthropy, we need to decolonise knowledge. There is lived and ancestral knowledge which has been largely ignored for years. Solutions from the Global North have been imported and adopted, with very little recognition and respect for native stories and wisdom. There has been limited consideration for communities called ‘under-developed’ and for those who live their lives differently than the ‘developed’. Even what is considered development needs to be challenged.

We need to reiterate: deep listening is critical to decolonising. A research launched in 2019 by Oxfam GB and I.G. Advisors A Leap of Faith: Conversations with funders of women’s organizations clearly shows the disconnect between the priorities and perspectives of funders and grantees. It demonstrates how open communication can build mutual trust, encourage stronger partnerships and enable more effective work to improve the lives of women and girls.

In today’s capitalist world, where money equals to power, we do recognise that we will always hold power as donors. So being aware of it and transparent about it at all times can be very helpful to build trust. Sometimes we think we are whispering, but our partners and grantees may hear us as if we are using a megaphone.

The recently published report, Lighting the Way – A Report for Philanthropy on the Power and Promise of Feminist Movements, by Shake the Table and The Bridgespan Group offers a beautiful and inspiring solidarity statement with principles to guide our work. It highlights the need to recognise our institutional privilege and exercise it for good.

We have been hearing a lot recently about devolving power in philanthropy. Expressions such as shift the power, practice-based knowledge, community-led development, equitable partnerships, trust-based philanthropy and participatory grant-making are making their way into more panels, publications and discussions than ever before. And while this is great to witness, the real success would be to see them in practice.

Solidarity in philanthropy means looking at people’s hearts, walking the journey together, being close to communities, being the voice and the arm that goes around the people we serve. 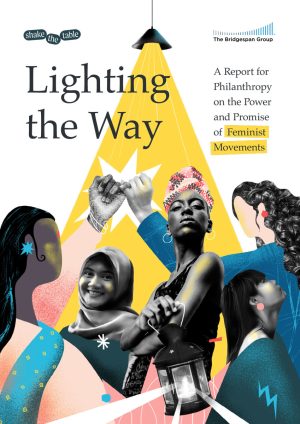 Laura Somoggi and Shivani Gupta are co-CEOs at the Womanity Foundation.